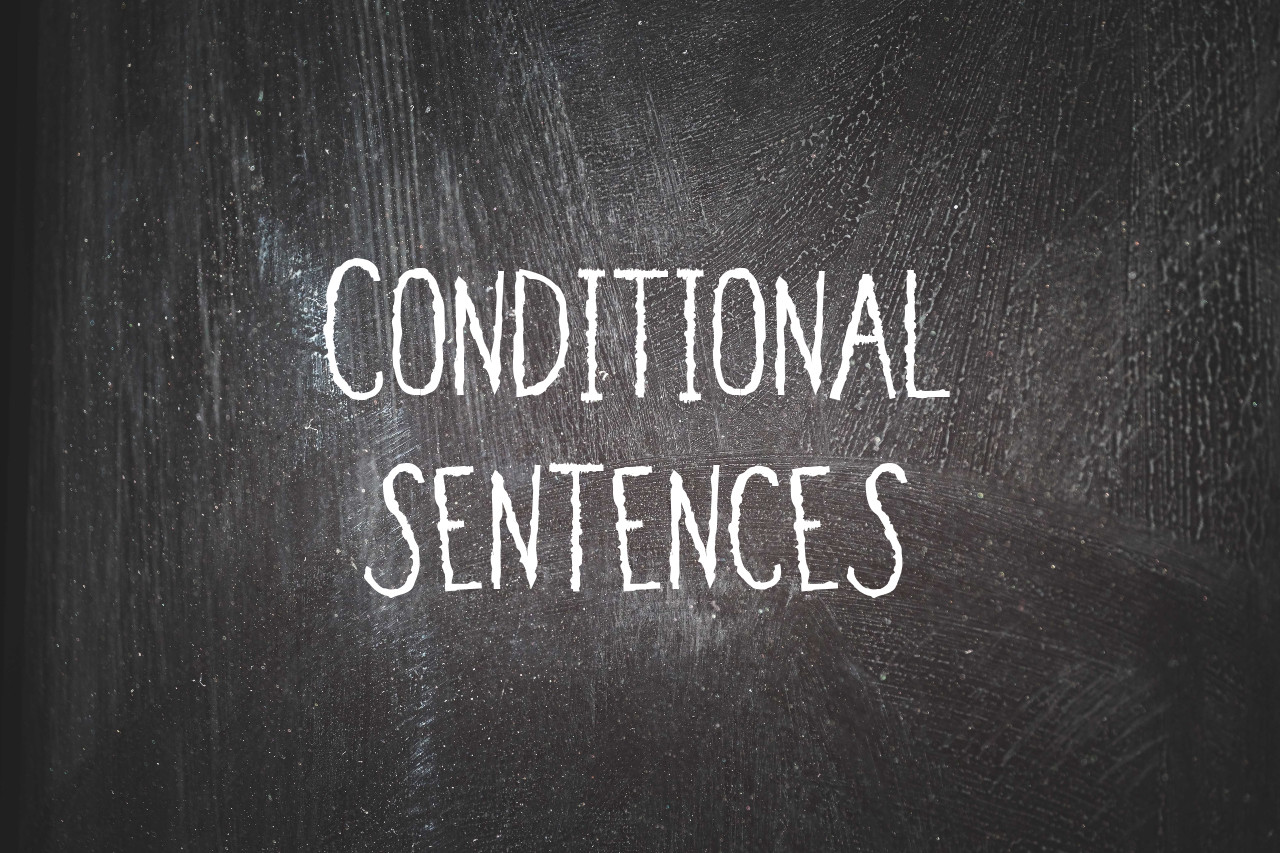 In this grammar post we’ll be discussing different types of conditional sentences in English: how to structure them and which tenses to use. At the end, you’ll find an online grammar quiz on this topic. We have a lot to cover, so pour yourself a nice cup of coffee and let’s get started!

First, let’s learn an important grammar term: a clause. A clause is a grammar unit containing a subject noun and a verb.

We can have simple one-clause sentences:

I don’t have time to watch TV.

We can make more complex, two- or three-clause sentences (or more), with special words linking them together, if necessary:

I am very busy today, so I won’t have any time to watch TV.

If I were not so busy today, I would watch something on TV.

If you start a sentence with an if-clause, don’t forget to use a comma before the main clause in writing. You can also switch the position of the two clauses, in which case there is no comma. The meaning remains the same.

I would watch something on TV if I were not so busy today.

When you order clauses like that, you see that ‘if’ is actually a linking word that brings the two clauses together.

If your if-clause is negative, you can use ‘if … not’ or ‘unless‘. Remember that ‘unless’ is already a negative, so it has to be followed by a positive verb. Also, ‘unless’ cannot be used with impossible conditions (i.e. the Third Conditional). The following two sentences mean exactly the same:

Unless you do as I say, I will get angry.

Another alternative to ‘if’ is ‘should‘ placed at the beginning of a sentence, followed by a subject + verb. This is a formal structure, used a lot in business English:

Should you wish to make a complaint, please contact our customer service. ( = If you would like to…)

Should you have any further questions, do not hesitate to contact us. ( = If you have…)

There are several linking words you can use when you want to set limits or impose restrictions:

Now let’s see what combination of tenses are used in conditional sentences.

This type is the easiest: Present Simple is used in both clauses, because we use it to talk about general truths and facts – results that always happen. You cannot use this type to talk about the past or the future.

This is the only type of conditional sentences where you can replace ‘if’ with ‘when’ or ‘whenever’:

When it rains, I stay in and read books.

Whenever I’m sad, I listen to music.

Also called the ‘real condition’, this type is used when we want to say what the logical or likely future outcome of something will be; it’s realistic to expect that something will happen as a result. We use the Present Tenses in the if-clause, and the modal verb will + infinitive (i.e. Future Simple) in the main clause.

This is the most common combination of tenses:

If you study hard, you will pass the exam.

If it starts raining, I will cancel the football practice.

Unless the weather improves, I won’t go out today.

However, depending on the context, other Present Tenses can also be used in the if-clause:

If you’re looking for Mark, you’ll find him in his office.

If you’re trying to mend that bike puncture, you’ll need some tools.

If you have finished your grammar exercise, I’ll check it for you.

USE OF OTHER MODAL VERBS

If you want to soften the meaning of the main clause because you are not quite sure what will happen, you can use modal verbs may or might + infinitive:

If he invites me to the party, I might go. (Maybe I will, maybe I won’t – I haven’t decided yet.)

Another possibility is the use of the Imperative in the main clause, when you want to give an instruction to someone:

If you’ve finished eating, do the washing-up.

If you’re sleepy, go to bed.

To practise, write down a few sentences saying what you will / might do…

(Here are my example sentences: If it rains today, I’ll stay in and watch a film. If someone invites me to a party, I’ll go find something nice to wear. If I feel unwell, I might drink some herbal tea.)

If you have the verb ‘to be’ in the if-clause, use the ‘were’ form for all persons singular and plural. This may sound too formal, though: in colloquial speech it’s common to use ‘was’ as you would normally use it in Past Simple.

If I were rich, I would live in a big castle by the ocean. (But I’m not rich.)

If she were kinder to people, everyone would like her more. (But she is unkind, and nobody likes her.)

If I won the lottery, I would travel around the world. (It’s improbable, but if it does happen, that’s what I’d do.)

If I became famous, I’d move to Hollywood. (It isn’t very likely that I’ll ever become famous.)

If I bought a brand new bicycle, I’d be very happy. (This is entirely possible; I still might buy it.)

The Second Conditional is often used when you want to give advice to someone (and for that someone we use objects pronouns):

If I were you, I would apologise to your boss.

If I were him, I would quit and find a new job.

Another frequent use of the Second Conditional is in polite requests, where you can typically use any of the following three options in the main clause:

You can also use it to ask for permission with phrases such as these:

Would you mind if I opened the window?

Would it bother you if I smoked in the office?

USE OF PAST CONTINUOUS

We don’t always have to use the Past Subjunctive to form the Second Conditional. To stress that the hypothetical present condition is temporary or in progress, use the Past Continuous tense:

If you weren’t working today, I would stop by.

It it wasn’t raining, we’d play badminton in the garden.

Let’s practise the Second Conditional a bit. Make a few sentences to say what you would (or wouldn’t) do…

(Just a couple of my own examples: If I were rich and famous, I would give a lot of money to charity. If I had a pet snake, I would name it Marcus. If I didn’t have to go to work tomorrow, I’d meet up with my friends.)

Of the four types of the conditional sentences, this is the only one that actually refers to the past – an unreal or hypothetical past. The function is simple, but the structure takes a bit of practice – too many verbs crammed together!

I will use the same examples sentences that I provided for the First Conditional, so you can see the difference:

If she had studied hard, she would have passed the exam. (But she didn’t study at all, and she failed it.)

If it had started raining, I would have cancelled the football practice. (But it didn’t rain, so I didn’t have to cancel it.)

The Third Conditional is often used to express regret:

If I had known he was a thief, I wouldn’t have given him my car keys. (But I did give him my car keys and he stole the car; now I wish I hadn’t done that.)

If we had listened to you, we wouldn’t have made such bad choices in life. (But we didn’t listen to you, and we did make a lot a poor decisions.)

In the Third Conditional sentences it’s possible to invert the word order in the if-clause and drop the ‘if’ altogether. (The main clause remains the same.)

Had we listened to you, …

USE OF OTHER MODAL VERBS

Similar to the Second Conditional, we can use other modal verbs as well, not just ‘would’. In this case  ‘might’ or ‘could’ can be used to say that something might have happened or could have been possible:

If we had listened to you, we might have made a different decision. (That would’ve been a possibility.)

If I had known he was a thief, I could have called the police. (I would’ve had that option.)

Think about this: what would you have done…

(If I had been born in the 17th century, I would have become a pirate. If I had known / Had I known that cigarettes were bad for my health, I would never have started smoking. If my best friend had asked me for money, I would’ve given him some.)

Don’t be alarmed, but on top of the previous four types of conditional sentences, there are also the so-called ‘mixed conditionals’. They actually make a lot of sense, but make sure you understand how the Second and Third Conditionals are used first or this will be difficult to figure out.

Imagine you wish something happened (or didn’t happen) in the past, so you start your conditional sentence as a Third Conditional, but the result you refer to happens to be in the present, or even in the future. You can’t keep the usual Third Conditional form, because everything in it refers to the past. What do you do? You combine it with the Second Conditional:

If I had listened to you [Past Perfect for the unreal past condition = 3rd Conditional], I wouldn’t be in this mess right now [would + infinitive for the present outcome = 2nd Conditional].

It’s also possible to talk about something you would have done (3rd Conditional) if your present or future situation were different (2nd Conditional). In this case your if-clause refers to a hypothetical present situation, while the main clause expresses an unreal/impossible past outcome:

If I weren’t travelling to France next month [hypothetical future condition], I would have signed up for that seminar [hypothetical past].

I hope this post hasn’t given you a massive headache! If English is not your first language, you’ll be relieved to know that native speakers tend to make a lot of mistakes with how they structure conditional sentences. But also, students sometimes think they’ve spotted an incorrect grammar use of the conditionals, when it’s really a mixed conditional type of situation where the speaker wants to add nuance or establish a particular kind of link between the past and the future, or the present and the past, etc.

As you could see from my explanations and examples, many combinations of tenses and modal verbs are possible depending on the exact context, apart from those typically presented in the EFL coursebooks.

If you’d like to practise the conditionals, do the twenty-question grammar quiz I’ve prepared on this topic (mixed conditionals and more complex sentence patterns excluded). If you have any questions, feel free to post them in the comments section below, along with your example sentences.